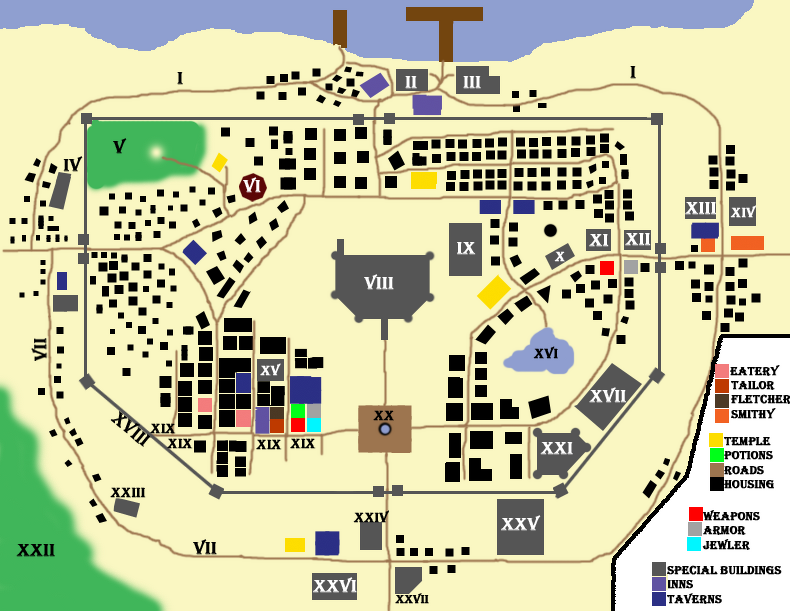 Roads leading along the outside of the walls from the east and west gates to the shipyard.

The Mithryn shipyard is only open for six months out of the year, but during those months it is important for getting the city supplies for the next winter.

A commonly visited brothel located just outside the city walls to the west. A location frequently used for conducting some of the less savory business around town.

The local chapter of the Mage's Guild, it is currently under the management of the Arcanist Turgûl Templaistar.

The road leading along the outside of the walls from Ord Pass to the slums. The Tannery is located on this road.

The castle and residence of the royal family, it is well defended by a "moat" of spikes. The road leading to the castle has the statues commemorating the royal linage.

The royal stables house the noble steeds of the royal family, such as King Ataeus' favored horse.

Armory for the royal guard and royal family.

A popular location for the local dwarven miners to relax after a long day mining. Usually avoided by non-dwarven folk.

The mining center serves as the headquarters for the mithril mining operations that the city thrives on.

A large wall surrounding the town made of black stone. There are several towers along the wall for the guards to keep watch from.

Community content is available under CC-BY-SA unless otherwise noted.
Advertisement